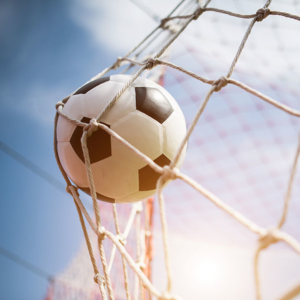 It is the 38th minute, and suddenly, everyone on the pitch gets really hectic. The opposing team is ready for their attack and heads towards the goal, closely followed by defenders of our team. Immediately, the goalkeeper is alerted and brings his body into a position that should cover as wide a range of the goal as possible, flexibly springing from one foot to the other in order to be ready for the inevitable leap. The centre forward dribbles the ball in front of him, stops, gets himself into position, shoots, and – goal!

Shock. How did that happen? Surely, the goalie must have seen that!

What we completely forget in the ensuing condemnation of the goalkeeper (“He cannot hold a ball!”, “Is he blind?”) is that we have observed the scene from a very privileged perspective. From the one in front of the television screen, similar to a helicopter, from above, and this gives us a complete overview of all the events on the pitch – the movement of every single player, the whereabouts of the ball etc. Thus enabling us to be better prepared for any attack compared to the goalkeeper.

While we are still discussing, completely stunned, the ‘failure’ of the goalkeeper, the review of the scene – in slow motion, and with a camera positioned right behind the goal – shows us a very different picture. It shows us exactly the perspective that the goalkeeper had during the entire course of the situation: being right on the ground, looking towards the playing field, numerous players gathered in front of the goal (both from his own as well as from the opposing team), all eager to either get the ball into their possession or to keep it. A bunch of footballers who keep blocking his sight to where the ball is in a given moment – and who reveal the angle from which it will come very, very late…

Switch to real life. To our working environment, where we have to deal with different perspectives and viewpoints every day. We might launch ourselves into a project with a given set of information and the associated viewpoint – while partner teams may approach the issue with different or less information and therefore with diverse perspectives. If we want to avoid a situation as we have experienced it with the goalkeeper – accusation, condemnation and subsequent conflict before we have questioned the situation -, we should consider taking different perspectives of others from the outset.

Coaching offers tools that help to consciously take a different perspective and thus to view situations from new angles. This not only gives the individual the opportunity to obtain more information about a particular situation, but also, above all, to better understand others and to communicate more efficiently with their environment through this understanding.

For a long time credited as a Native American aphorism, “walking in someone else’s moccasins” is considered an efficient method for taking the position of another person and thus a better understanding of their angle of view – not only from the intellectual viewpoint, but rather from the aspect of empathy and compassion (I actually once experienced that someone had forgotten their own hay fever while they were walking in another person’s shoes, so intense was their identification with the other person).

Another useful tool is called ‘perceptual positioning’. It is great especially in controversial situations where understanding the other person’s viewpoints and reasoning can help to actually deblock a situation and find a clearly identified way forward. It is an exercise where you physically change your position (different chairs to sit on, different earth anchors to stand on…) and experience a given situation from

Respect for every single role in a team is essential, if we want organisations to function in the best possible way, and the capacity to change perspectives is one of the non-negotiables to get there.

Five easy steps to begin with:

Being able to change perspectives can help you in all sorts of situations. Apart from the very obvious advantage of better communication – be it in a professional or private setting -, changing your view of things influences yourself in a positive way, can cheer you up and – in a hard-hit situation – can even make you capable of acting again.

Leadership is an attitude, a mindset. Not an action.

The hard truth about soft skills: are they really that ‘soft’?
Scroll to top