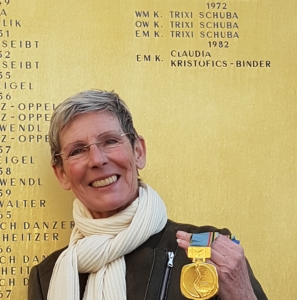 In her book „Life on Ice”, Trixi Schuba, Austrian Olympic Champion in Figure Skating 1972 and two times European and World Champion (1971 and 1972), tells her very personal story about her exceptional career on skates – from the very beginning as a 4-year-old, her daily routine as an amateur skater which rewarded her with a series of incredible wins, until the last years of her career as a professional skater for ‘Holiday on Ice’. Trixi is ruthlessly honest when she narrates about her childhood, her upbringing, her critics and her successes – and genuinely grateful for the life lessons she was taught.

We sat down with her, trying to find out where the Champion in Trixi emerged from, how she coped with setbacks, dealt with adversity, where she found her inspiration and personal power – and pursued her way up to being one of the top athletes of Austrian Sport’s history.

Trixi still enjoys the international contacts she made as an active athlete and served as a judge at the World Figure Skating Championships in 2015, 2016 and 2018.

How does one become an Olympic Champion? What are the most important qualities one has to be made of?

From a very young age, I had an enormous sense of duty and a fair dose of discipline – two characteristics that are, in my opinion, essential for any kind of ambition. To succeed in a (international) sport’s competition, talent alone is simply not enough. Combined with my rather considerate, level-headed temper and a love for precision and accuracy, I was made for the ‘compulsory figures’, the basis of skating, where one had to perform geometrical figures with great exactitude. Nowadays, these figures are included in ‘free skating’. However, at the time, it used to be a separate element in all tournaments (Olympics included) with a distinct rating that used to have quite an important weighting in the final score.

I enjoyed practising and working hard in order to get better and better in this discipline – after all, I just had to bring my former love for maths and geometry that I used to have in school down from my head and hands into my feet. There is no room for cheating, no possibility for subjective rating. The figures were either exact and neat – or not.

It is fair to say that I was unbeatable in this part of the competition, and I knew it, which lead to another important characteristic that I needed to have in order to be successful: self-confidence – and the conviction that this was what I wanted to do, this was what I was good at. The desire to make it to the absolute top was eventually a quite natural step.

So yes, I think for me, the most important qualities were discipline, strength of nerve, purposefulness and belief in myself.

Are these things which also characterise you in other areas of life?

Absolutely. All the above-mentioned attributes were instilled in me quite early on, predominantly by my mother. They were a second nature throughout my life and helped me climb the athletic ladder – marked by the necessary power of endurance when it came to quite drastic enforcement of weight loss or the absolutely rigorous training program – and also how I conducted my life later on. For example, the way I organised my life abroad when I was part of ‘Holiday on Ice’. As much as I enjoyed being in the spotlight, ‘free’ and living a circus’s life – I quite quickly realised that I was the same dutiful girl with the same responsible notion about how I wanted to show up in the world.

What other milestones have shaped who you are today?

One of the most formative events in my life was without a doubt the early death of my father, when I was only 11 years old. He had been the emotional component in my life, whilst my mother always was my moral compass. After my father passed away, my mother had to endure quite a long period of financial challenges, which she mastered with perseverance and tenacity. Those early years have defined the way in which I still spend my money until today; how I handle it and look at it. And I realise that it has always meant security for me rather than luxury.

What is important for you these days?

I focus on fundamental values and try to make them an integral part of my everyday life: appreciation for other people, spending time with those whose company I enjoy and who enjoy mine. Appreciation for nature and animals – I cannot imagine being without my beloved dog -, enjoyment of travels and most of all gratitude for health and the discipline to make my contribution to it through exercise and conscious nutrition.

Also, I add a bit of ‘freestyle’ and spice to my disciplined conduct, which used to be a second nature throughout my life, by not following a fixed daily schedule, by enjoying the odd siesta when I feel like it and by spending a good 10 weeks every year in Southern France, where the sea is balm for the soul, the food is delicious and every day gives me the chance to learn something new.

I aim to keep my energy levels up, by handling them really carefully. Anger has no place in my life. It makes no sense to get agitated in traffic jams, as well as it is futile to wail about the past or the future. I found my inner equilibrium, and I contribute my part to a positive whole.

Do you have a favourite quote that has accompanied, maybe even shaped and supported you throughout your life – or over a large period of time?

There are two proverbs that I can identify with very much. The first one is: ‘The way is the goal’. It describes how I see the journey of life – at least from my privileged ‘mature’ point of view, with all the things experience taught me.

The second one is like the ‘driver’ in my life: ‘Strength lies in peace’. It is the conviction that helped me navigate through ups and downs – and the belief that made some of the most extraordinary moments of my life possible.