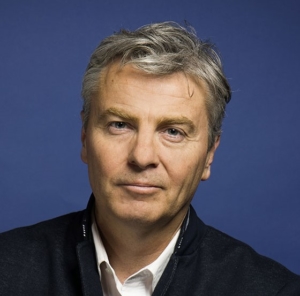 “You have to optimise the opportunity.”

When it comes to media, Pascal Boulanger has seen it all. 32 years in the newspaper, radio and television business shaped him, gave him experience in a broad field of activities and access to some of the most interesting contemporary personalities in sports, economy and politics – and sometimes, with a sidestep, even to musicians… In his most recent role as Deputy Chief Editor of TF1, one of France’s free-to-air television channels and most popular domestic network (and by the way one of the oldest television channels in the world albeit with several name changes during its history), Pascal was what you would call established, with a welded team and focusing on the topics he had become a specialist in: economy, automotive industry and mobility.

And then, on the height of his success, at an age when most people slowly start thinking about their retirement, Pascal turned his life upside down, moved from Paris to the prestigious Côte d’Azur in South France and literally created a ‘place in the sun’: in 2018, together with his wife Valérie, he opened his very own hotel: Hôtel Athénée in Cannes.

Having interviewed countless people in the years of your media career yourself – how does it feel to be at the other end of the microphone, even though it is not completely new to you either?

It feels funny. I don’t remember how many people I have interviewed throughout my career – but if I said it was more than roughly 37,000 in 32 years, I am probably not exaggerating. So I am more familiar with the asking side of the microphone.

Was your professional path always designed to be the way it finally turned out?

My academic beginnings wouldn’t say so. I was educated to be a legal practitioner with specialism in economic and tax law, and I was a keen and passionate cyclist. Both disciplines weren’t meant to become my final career. To cut a long story short: I started to job at L’Equipe (editor’s note: French daily sport’s newspaper) as a student, and that kicked off a whole series of events, giving me chance after chance – and the opportunity to learn the media business from scratch. I gradually worked in print, radio and television journalism, presenting everything from late-night news editions to features and documentaries. Once I got started, I was determined to succeed in this industry.

Of all your interview partners over the years – is there anyone who is still in your vivid memory?

There will always be some people who’ll move you more than others. And there are actually a few personalities who left their mark and who will be engraved in my memory forever. Some for the qualities of the respective person, their wisdom or humility, some for their visionary and creative qualities and some because of the relevance of the moment. The latter was the case with an interview that I conducted with Pierre Bérégovoy (editor’s note: 1925-1993, French politician, Prime Minister of France 1992-1993) who committed suicide soon after our encounter.

The person who impressed me most of all times, the most beautiful interview I remember, was with Yehudi Menuhin (editor’s note: 1916-1999, American-born violinist and conductor). It was sublime, although completely out of my field. I discovered a great man, a real humanist, with a depth in his answers that was incredible. It was a privilege to be able to spend some time with him and to talk to one of the greatest violinists – if not the greatest – of the 20th century.

Yet there were also other interviews, those that left a chill in your bones. I had the privilege to conduct an interview with Slobodan Milošević (editor’s note: 1941-2006, Yugoslav politician, President of Serbia, President of the Federal Republic of Yugoslavia) just months before he was arrested in March 2001 and brought to the International Court of Justice, which was a completely different experience. The whole atmosphere of the encounter was frosty, and I did not feel comfortable at all. Even though I was allowed to ask any question I wanted, obviously, there was not an answer to all of them. After all, this was still during the war in ex-Yugoslavia.

With all these encounters with people at the highest level of political or economic life and your dedication to your television career – what made you think of ending this part of your professional activity and starting a completely new one?

It was indeed a decision that I did not take lightly and not from one day to the other. After all, having acquired a certain expertise in my field that gave me a lot of freedom, all was going very well. In fact, I have to say ‘we’, because it was a decision that I did not take alone yet with my wife Valérie who has also worked for TF1 for 30 years. We both had different reasons why we imagined something new for our next decade of professional activity. As passionate as we were for our jobs, things had changed over the years. However, instead of complaining about circumstances we were not so fond of, we preferred taking our fate in our hands and started to work on our entrepreneurial adventure. That meant having total clarity about what it was that Valérie and I both really wanted. We both love the contact with people, and we both love to entertain, so the idea of running a bed & breakfast or a hotel was eventually born. Every decision was made in a team effort, right down to the choice for Hôtel Athénée after having visited more than 50 different establishments.

How did you manage the enormous change from three decades of well-rehearsed activity as an employee to the completely new situation of an entrepreneur with all its side-effects?

When you start off with a business, you have to deal with a lot of different situations and emotions, and we have been through a lot of them. There can be everything from ‘the fear of your own courage’, setbacks in your project, insecurity that it couldn’t work out to the point of certainty that it will all be fine, that you are on the right track and finally on the way to your goal. If there are consequences to bear because of a mistake, well, then I can accept them easier because it was my own mistake and nobody else’s.

On the other hand, we got what we were hoping for: absolute freedom in our activities, daily contact with people from literally all over the world – 70% of our guests come from abroad – and so much positive feedback for our endeavours. When the going gets tough, people tend to look back only to the good times and not the reasons that made them change their situation in the first place – hence making the present worse. We keep focusing on the values that we wanted to create with our new activity: independence and freedom, two characteristics that for me personally define success.

As a Frenchman, what makes you French?

I actually never thought about that, tricky question. I definitely see myself as an Ambassador of the French brand if you will. As such, I aim to show my guests everything that I think France is and should be famous for: the beautiful landscapes, the sea, cultural events – like the International Film Festival taking place in Cannes every year – and the famous gastronomy to name just a few.

If you could go back a couple of years with your wisdom of today – would you take the same decisions?

Absolutely, we don’t regret anything, on the contrary! In life, you have to be audacious and grab opportunities by the horns. There will be obstacles to be overcome, a lot of surprises to be dealt with and discussions to be held when it comes to different opinions and strategies.

Days are very long in the hotel industry, and sometimes we are just exhausted. However, if you keep your ‘eyes on the prize’, you will always find ways to ‘optimise the opportunity’.

Then, Pascal adds his life motto:

“To love and be loved (is the ideal. As long as it involves the same person.)” Jean Cocteau